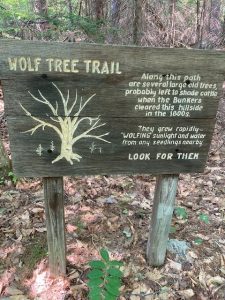 Europeans call ancient trees that persist in a landscape which has dramatically changed during the tree’s lifespan “legacy trees” (6). Scattered throughout New England are some special legacy trees called “wolf trees.” Wolf trees are ancient denizens of our northeastern forests, perhaps 150-300 years old, remnants from northeastern forests that were largely cleared when European settlers began to farm in New England. Wolf trees grew from young trees in a diverse, untouched forest; they escaped the settler’s axe and became pasture shade trees; later those wolf trees that escaped nineteenth and twentieth century logging faded back into regrown forests. Wolf trees are largely oaks, but many are other hardwoods, such as sugar maples, shagbark hickories, and, in the past, chestnuts, and birches. One can find these massive trees next to long-abandoned stone walls, near old stone pasture gateways, or in former upland pastures. Michael Gaige describes finding a huge old gnarled wolf tree in a New England forest as an enchanting experience: “wolf trees are our Ents” (3).

Where did the term “wolf tree” come from? Shaw guesses it may have come from foresters in the early 1900s, likening these “ponderous relics” to predators that were sapping sunlight and nutrients from the more economic younger timber growing in around them (6). Wessels suggests that the name may have resulted from characterizing these trees as big lone wolves. Wessels adds that regardless of where their name came from the term [wolf tree] is a good one: “these trees, full of wilderness, are as stirring to come upon as a fresh paw print in the snow” (8). 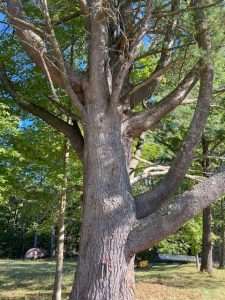 The history of our New England forests explains the evolution of our wolf trees (8). In the early 1700s the New England forests were primal and diverse. The Nipmuc and other indigenous peoples did not deforest large areas; they lived with and among the trees. In the 1740’s European settlers arrived in New England, bringing their lifestyle of farming and herding. The early New England settlers hewed farms out of the forests. Farmers often clear-cut low lying flat areas around their houses and barns, and pastured cows, sheep and other farm animals in rocky uplands. Initially the livestock browsed on the undergrowth within the forest, while the farmers girdled large trees within a pasture area to bring in more sunlight. As farms were carved out of the New England forests, massive amounts of stones were moved. Miles of stone walls were built along property boundaries and pastures, with the peak construction of stone walls occurring between 1810 – 1840 (4). As pastures emerged from the forest, farmers spared some larger trees as shade trees for their stock. Many of these shade trees were at corners of pasture boundaries, or along stone walls; a few were left standing in the middle of pastures. 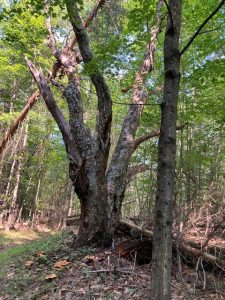 These shade trees that were spared from the settler’s axe became our wolf trees. These oaks, maples, and other shade trees, spared from the settler’s axe, suddenly had little competition for sunlight, water, or other nutrients necessary for tree growth. Under such changed conditions, especially with no competition for sunlight, these trees grew rapidly and developed massive low spreading branches, wide girths, and broad canopies.

Deforestation of New England continued, peaking between 1830 – 1880. By 1900, however, there was significant abandonment of New England farms. Many farmers moved west to work better and more easily tilled soils. Others left farming altogether. Industrialization in New England accelerated and many former farmers moved to cities. In 1876, for example, 76% of Worcester Co., MA, was under cultivation or in pastureland; by 1976 only 13% of the land in Worcester Co. was open farmland (6). As New England farms were abandoned much reforestation occurred. Second and third growth forests reoccupied much of New England’s farmlands. White pines rapidly grew into these former pastures. Some of these regrowing pines became wolf trees in their turn. There are a few massive pine wolf trees that still survive, called “bull pines” by some old New Englanders. Some describe these massive pine wolf trees as looking like upside-down tarantulas (6) Most of these old pine wolf trees disappeared when, beginning around 1910, portable sawmills were brought in to clear-cut pines regrowing in the former fields. By 1915, after old pasture pines had been clear-cut, mixed hardwood forests regrew. 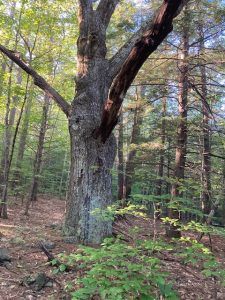 Oak Wolf on the Estin Trail at Proctor Academy

The oak and hardwood wolf trees, the shade trees along the stone walls and at boundary lines, also suffered from forestry practices in the first half of the 1900s. These large gnarly hardwood wolf trees had little wood value, and were massively challenging to cut down, but by the mid-1900s foresters considered these hardwood wolf trees as a “forest ulcer,” whose “elimination [was] a strict principle of forest management” (1). Fortunately many of the old hardwood wolf trees that grew in difficult-to- timber locations survived the forestry practices in the 1900s. In the 20th century forestry management changed from a singular focus on clear-cut harvesting of timber towards valuing forest diversity and preserving broader habitats for animal diversity. In 1945 Charles Elliot wrote “woodman, spare that wolf tree….these ugly wolf trees, these snags, these trees classified as worthless space fillers are valuable wildlife units in the vast stretch of North American woodland”(1). Loggers began to spare the remaining wolf trees. 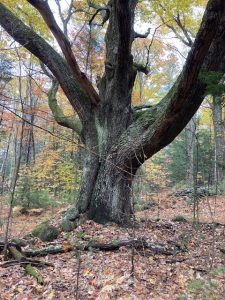 The study of wolf tree habitats is fascinating. Our remaining old gnarly wolf trees are “like the forest’s town square for animals” (3). These ancient trees offer structural complexity for animals not found in the straight growing second or third growth trees. Many animal species utilize the hollows in wolf trees for nests or dens (coyotes, foxes, bears, porcupines, racoons, bats, and snakes). Great numbers of birds make their nests in the nooks and crannies in wolf tree branches, trunks, and canopies. Spiders and insects abound in these old trees, as do fungi. There are 19th century anecdotes about flocks of migrating or nesting passenger pigeons totally obliterating red oaks. Reportedly the weight of these huge flocks of pigeons was enough to fracture branches in some wolf trees (7). Alas, our remaining wolf trees are dying out. The irony now in our regenerating forests is that wolf trees, which were spared because of their value for shading livestock, now are being choked out by shade from the new growth trees. Most old wolf trees have dead lower branches, shut down from photosynthesis because of the shading from young encroaching trees. 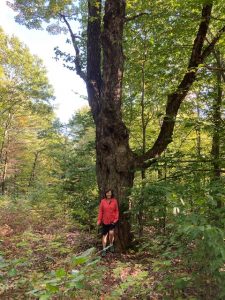 The remaining old wolf trees have lived through much on New England’s history: They began to grow during the Native American culture; in their mid-life they endured the farming and deforestation of New England; they shaded livestock and homes, and perhaps hosted flocks of passenger pigeons; as elders, they have survived forestry practices and provide vast types of complex animal habitat in regrowing forests. Can we save some of these mighty wolf trees a while longer?

Go on a Wolf Hunt

Before these beautiful trees disappear, go on a “wolf hunt” while out in our New England forests. Follow an old stone wall or look to where pastures once were when you come across an old cellar hole, and, if you are lucky that day, you will see a “wolf.”  We encourage you to send photos of the trees that you find to us at srkgc@srkg.com Please submit photos with your name and (rough) location of the tree. 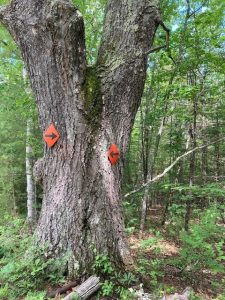 Although, we will not be able to share a potluck supper this year together — we are looking forward to seeing the SRK Greenway community in a virtual Zoom Meeting on Sunday April 11th at 5pm.

It all starts at 5pm with a short SRK Greenway business meeting to update the membership on the exciting work and developments of the past year. SRK Chair, Tim Eliassen, will provide a quick overview health of the organization and share some highlights of the progress made in the past year.

Following the brief meeting, Tim will introduce our featured speaker, Henry Jones, from the NH Fish and Game Department. Henry is the Moose Project Leader and regional wildlife biologist in central New Hampshire. His talk is titled ‘Moose Ecology and how this relates to historic and current status in NH’. Henry will include an update on the latest moose population research and provide his perspective on the current situation.

Please come and enjoy an evening with the SRK Greenway hiking community and learn about the current Moose population in our Granite state. This meeting and lecture is Free and open to the public.