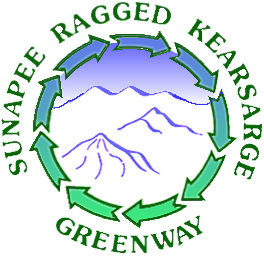 BY-LAWS
of
THE SUNAPEE-RAGGED-KEARSARGE GREENWAY COALITION

ARTICLE II. PURPOSES
The purposes of the Greenway Coalition are to establish and promote the conservation, ecological, educational and recreational objectives in the towns making up the Sunapee-Ragged-Kearsarge region of New Hampshire through, but not limited to:
1. Identifying and conserving areas and sites of ecological or historical significance or having aesthetic qualities,
2. Establishing and maintaining trail corridors in and between Greenway Coalition towns, for public enjoyment, and,
3. Co-operating with existing organizations to further the purposes of the Greenway Coalition.

ARTICLE III. MEMBERSHIP
1: Membership is open to all persons having an interest in the purposes of the Greenway Coalition.
2: The members may, upon recommendation of the Board of Directors and by majority vote, establish classes of membership and fix dues for each class of membership.
3: A person shall become a voting member by paying the applicable dues.

ARTICLE VII. POWERS AND LIMITATIONS
1: Insofar as they are consistent with the above purposes, the Board of Directors shall have the powers to:
a. Make contracts of any kind, and
b. Do any acts necessary and proper, including the exercise of all general powers conferred by the laws of the State of New Hampshire as they may be now or as hereafter amended.
2: All gifts and bequests to and net earnings and assets of the Greenway Coalition shall be used only to further the purposes and for the benefit of the Greenway Coalition.
3: The Greenway Coalition shall not participate nor intervene in (including the publishing or distribution of statements) any political campaign on behalf of any candidate for public office.  Nor shall the Greenway Coalition attempt to influence legislation, unless such legislation shall directly aim to encourage the purposes of the Greenway or, conversely, directly threaten those purposes and the integrity and continuity of the Greenway trail lands.  The Greenway Coalition, in instances where its purposes are engaged, may advocate policies and practices consistent with those purposes but shall not do so in any way endorsing or opposing a candidate for public office.
4: The Greenway Coalition shall not carry on any other activities not permitted to be carried on (a) by a corporation exempt from federal income tax under section 501(c)(3) of the Internal Revenue Code of 1986 or corresponding section of any future tax code or (b) by a corporation, contributions to which are deductible under section 170(c)(2) of the Internal Revenue Code of 1986, or corresponding section of any future federal tax code.

ARTICLE VIII. MEETINGS OF THE BOARD OF DIRECTORS
1: The Board of Directors shall meet at least quarterly and as often as may be required.
2: Meetings shall be called for a time and place, within the Sunapee-Ragged-Kearsarge region, designated by the Chairperson.
3: Upon written request of any three Directors, a meeting shall be called by the Secretary and held at a time and place within the Sunapee-Ragged-Kearsarge region, as designated in the request.
4: Notice of a Board meeting shall normally be sent to each Director by the Secretary at least seven days prior to the designated meeting date.
5: The presence of Directors from at least six towns shall constitute a quorum.  Directors-at-Large shall not be considered in a quorum count.
6: To carry a motion by the Board requires a quorum and a simple majority of Directors present.
7: Any Town Director may request a “Town Vote,” meaning a vote of the Board for which each Town has a single vote regardless of whether one or both Town Directors are present.  No Director-At-Large shall vote when a “Town Vote” is requested.
8: Any member of the Greenway Coalition may attend any Directors meeting.  Any member may be allowed to speak at the discretion of the Chairperson.  Notification of Director’s meetings to the general membership shall be as determined by the Directors.

ARTICLE XI. FISCAL YEAR
The fiscal year of the Greenway Coalition shall be fixed and, if necessary or appropriate, changed from time to time by the Board of Directors.

ARTICLE XIII. COMMITTEES
1: Standing Committees:  Members may, upon recommendation of the Board of directors, establish and fix the duties of such standing committees as deemed requisite for achieving the purposes of the Greenway Coalition.  Core standing committees shall include: membership, trails, newsletter, website, landowner relations, and archives.
2: Special Committees may be established by the Board of Directors as the need arises.
3: Membership on all committees shall be by appointment of the Board of Directors.

ARTICLE XIV. DISSOLUTION
Upon termination  and liquidation of the Greenway Coalition, any assets remaining after payment of all obligations shall be given only to one or more of the following, as previously determined by majority vote of the members:
a. Towns whose commissions or boards have contributed to the Greenway Coalition
b. Ausbon Sargent Land Preservation Trust
c. The Society for the Protection of New Hampshire Forests
d. Lake Sunapee Protective Association
e. The Nature Conservancy, New Hampshire Chapter.

ARTICLE XV. AMENDMENTS
1: These By-Laws may be amended by a two-thirds vote of the Towns represented on the Board of Directors and then approved by a majority of general members of the Coalition present and voting at the next regular Annual Meeting, or at a Special Meeting duly called for that purpose. (Per RSA 292:6)
2: The text of any such proposed by-law amendment shall be inserted in or accompany the notice of the Board of Directors meeting at which the amendment is considered.

[NB: original by-law text reads: XV. Para 1:“These by-laws may be amended by a two-thirds vote of the Towns represented on the Board of Directors.”]

ARTICLE XVI. NOTICE
Whenever under these By-Laws written notice is required to be given, such notice shall be deemed given when deposited in the United States mails addressed to the member at the address recorded in the books of the Greenway Coalition.

ARTICLE XVII. PARLIAMENTARY AUTHORITY
The rules contained in Riddick’s Rules of Procedure shall be the parliamentary authority in all cases not covered by these by-laws.  (see Floyd Riddick and Marion Butcher, A Modern Guide to Faster and More Efficient Meetings, 1985 (paperback, print on demand).