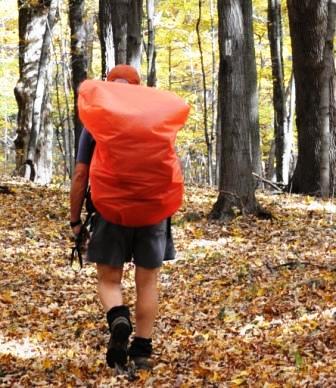 As the Hunting Season gets into full swing here are some tips for hikers to safely use the woods this time of year.

Wear blaze orange—Wear a blaze orange hat and vest (and pack cover if backpacking) when hiking in fall, winter and spring. New Hampshire requires hunter education classes prior to issuance of licenses, which has led to a significant decrease in hunting-related accidents. Even though these safeguards have been put in place, both hikers and hunters need to do their part to prevent accidents. In late 2002 and early 2003, two A.T. hikers were shot and seriously injured in separate incidents by hunters who mistook them for deer. Neither hiker was wearing blaze orange, and neither hunter properly identified his target.

If you hike with a dog, it should also wear blaze orange visible from all sides. The SRKG recommends that pets be leashed at all times while hiking.

Avoid wearing colors that could be mistaken for game animals. Avoid white or brown during deer seasons; red or blue during turkey seasons.

Use extra caution near roads and in valleys—Be especially cautious within 1/2-mile of road crossings (both approaching and leaving) and in valley areas.

Be heard—Make sure you are heard before you are seen by whistling, singing, talking, etc., while you hike.

Avoid hunter interference—Hikers should be aware that interference or harassment of hunters in the lawful pursuit of game is a violation of law. This includes interference or tampering with dogs used in the pursuit of game where allowed by law. Sportsmen are our partners in conservation—encounters between hunters and hikers are opportunities to raise the awareness of both groups.