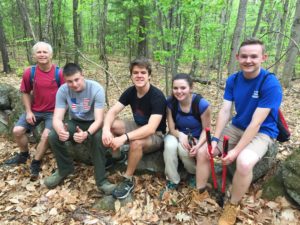 Working with the John Stark High School chapter of the National Honor Society the SRK Trail Crew had a very productive workday in Newbury on Friday May 19th.

The crew concentrated their work on improving the Trail to the East of the old Bartlett Road between Newbury Harbor and Chalk Pond (SRK Trail #14).  We spent time clearing blow-downs and cutting back encroaching vegetation and generally widening and improving the trail. That section of the Greenway was poorly marked and difficult to follow so we added a significant amount of SRK blazes to better mark the trail.

It was a great group that volunteered their time to help improve our trails. Nathan Richer led the trail crew along with assistance from Dave Gardner. A special thanks to the National Honor Society at John Stark High School and Jake Morrill for the support.