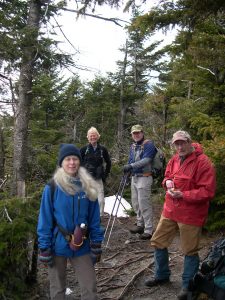 Online memories of Art Robbins come from people who knew Art as an exceptionally humane, hard-working, witty judge on NH’s District Court in Concord. Art died early October at his home in North Sutton.
Most of us knew him as an exceptionally humane, witty and probably too skinny SRK Greenway hiker, biker, and character actor at Sutton’s Old Home Day. After over 25 years on the daily judicial bench trying to help people who had a hard time helping themselves, Art deeply appreciated the trails and woods and charms of semi-rural New Hampshire not distant from his daughters in Manchester and Vermont.
He especially loved King Hill in North Sutton for its accessibility, its cellar holes and old quarry gently hinting of hard-working folk not too consumed with urban envies and ambitions. He led a few well-attended SRK Greenway hikes on King Hill and let people discover the mix of woods and history for themselves.
In summer,  his on-site cemetery re-enactments of Sutton’s civil war veterans revealed Art as a time-traveler who could inhabit lost souls.  Art was a very special man perfectly suited to New Hampshire’s personal touch. 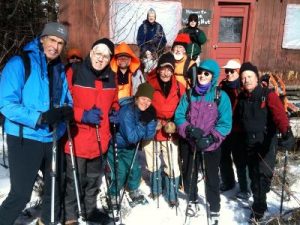 Please follow this link for more comments from some of Art’s other admirers.
We are not aware of any memorial gifts; but, we know that as his health slowly dropped Art especially loved the Northern Rail Trail for bicycling.